Synthesis of textures and bump maps of tiled surfaces – Part I 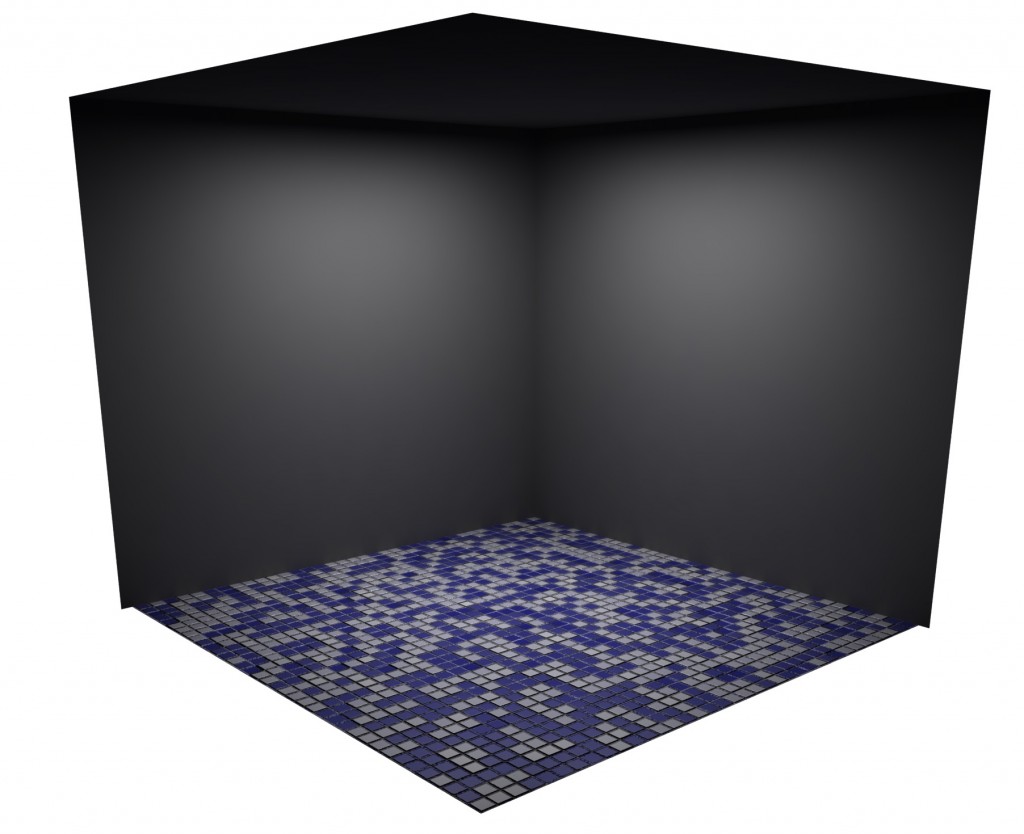 Tiled surfaces are a ubiquitous staple of modern architecture. In an interior space, floors and walls of rooms, from bathrooms to kitchens, and almost every space in between, can be covered with tiles. While, larger format stone tiles are used to clad buildings, delineate walkways and form patios.

The state of computer rendering of images, using global illumination or physically based rendering, has reached a point where it can fool the casual viewer into thinking that what she sees is a photograph. Details defining surfaces at various scales contribute a great deal toward creating this illusion. A simple item, such as a humble floor tile, can have a lot of detail both in its shape and in its color. This detail is generally defined in computer graphics using geometry and/or textures.

While the generation of textures to convey color variation is relatively easy, the geometric detail to capture the small nuances of tile shape can still be prohibitive to generate and render. The use of surface textures to represent color (be that diffuse or specular, depending on the tile and its surface finish) is part of most rendering engines. Small-scale surface geometric detail can be represented using so called bump maps (Blinn, 1978), where the local surface height of geometry is altered by the bump map for lighting/shading calculations only. This method does not alter the underlying geometry, which is evident from the silhouettes of bump-mapped objects; a bump-mapped sphere still casts a smooth circular/elliptical shadow. A variant of the method is to use a normal map, which encodes a perturbed normal at the lighting/shading calculation point, thus the local perturbation can be along any direction, as opposed to perpendicular to the surface, as the traditional bump mapping. A more advanced method, called displacement mapping, actually alters the local geometry in lighting/shading calculations.

This multi-part article was born out of the need and curiosity to procedurally generate tiles for use in rendering. The method presented and its implementation is capable of generating texture and bump maps of arbitrary sizes. Both square and rectangular tiles, with or without offset, can be created. A grout line of arbitrary color can be specified between tiles as well. The tiles can have any base color, which can be altered from tile to tile. This variation can specified to be between the base color and two other colors (think of it as a darker and a lighter version of the base color, for example, but can be any other colors). In addition, a color variation can be specified within a tile itself. Similarly, a bump map can be generated to alter the base height of a tile, which can vary from tile to tile. A local, per tile, variation can be specified as well. Finally, a grunge or grime map can be overlain the tiles to represent oh-not-so-clean tiles or remains of a spill.

At the heart of the method is a noise function. This noise function represents a random, albeit smoothly varying function. The implementation uses a realization of the Perlin Noise function (Adrian’s Soapbox, 2014) that was modified by yours truly. Thus I cannot claim that I wrote the noise function parts of the code, however I have modified it to suit my needs. Therefore all the credits go to the original author and hereby I thank him for publicly making available such code and the explanation that went with it.

Although the procedural tile generator was meant to be used as a set of C++ classes, part of a larger program, a simple driver program was written for it. This small program allows input files to be read using a rudimentary file format giving access to the parameters of the tile generator. The format of the input file is rather freeform; the parameters can be specified in any order, though logical groupings of them are encouraged.

The source code of the tile generator can be downloaded from tileMaker_v1. It was written in C/C++ and there is a supplied project file for Xcode. All the example input files are contained in the zip as well. Enjoy!

This section is in a form of a tutorial and a detailed explanation of what each parameter of the tile generator does. Starting with a simple model, and subsequently building up, more complex tiles can be generated. However, perhaps the most fundamental parameter of the tile generator is the specification of where to save the files, thus the input file needs a description of this

Similarly, the physical tiled area is specified by

Note that the above two parameters can be non-integer, since they represent some real-world dimensions. Although no units (meters, feet) are specified, as long as the real-world coordinates are consistent, things will work out. Thus, the sizes of the tiles themselves can be specified as

Note, that the grout thickness specified will be used for both the horizontal and vertical grout lines.

In summary, the figure below illustrates all these parameters on a sketch.

So far, using the above specifications alone, only square or rectangular tiles can be generated, but the tiles have to be aligned along both axis. By defining a parameter, tiles can be offset along the horizontal direction. If you want tiles to be offset along the vertical direction, well, just rotate the resulting texture maps by 90 degrees. Thus,

The tileXOffset flag turns on the offset generation of tiles for every even row, so the offset starts with the second row of tiles and it is done for every other row thereafter. This is shown in the figure below 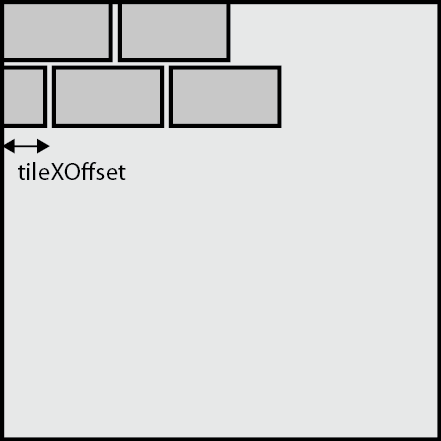 Color variation from tile to tile

So, let’s get started with something simple. A square, yellowish tile with some color variation was used to fill a room. The tiled area was 10.0 by 10.0 units, and the tiles were 1.0 by 1.0. The final rendering, done in Maya using Metal Ray, using an area light source in the ceiling, is as follows 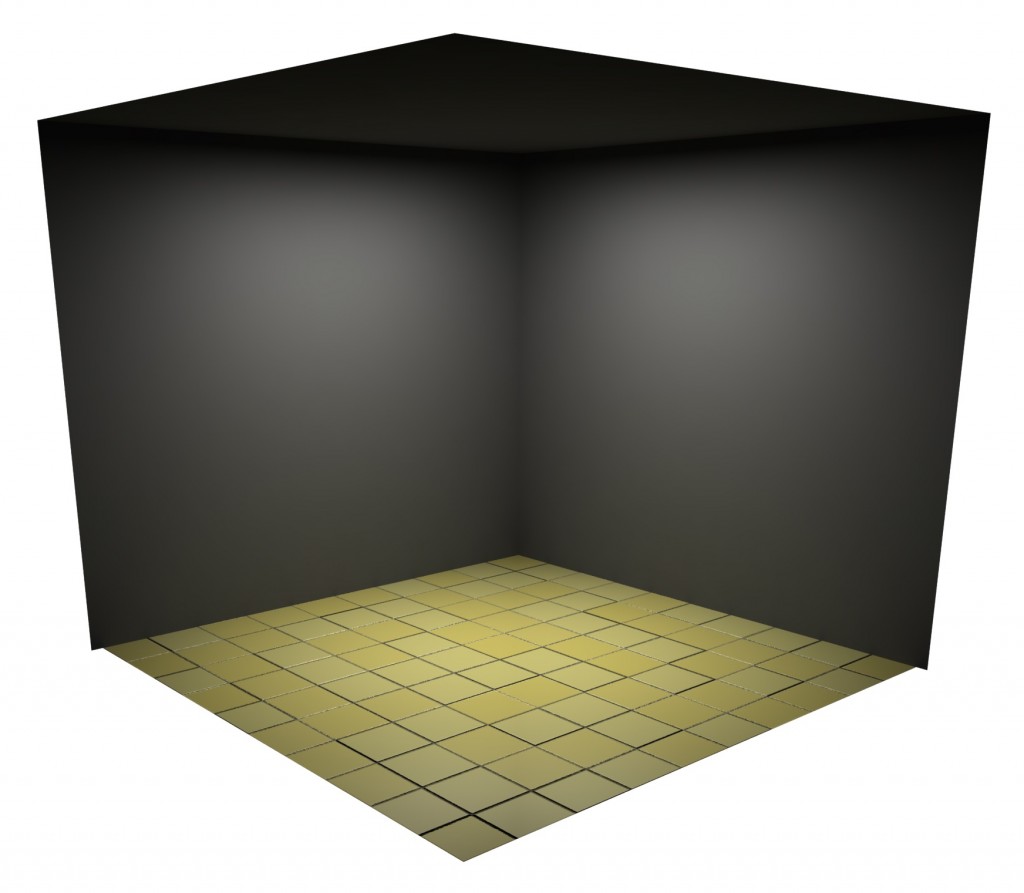 Note the subtle color variation from tile to tile. The colors are uniform within each tile. This image was rendered using the following diffuse texture map and a bump map. 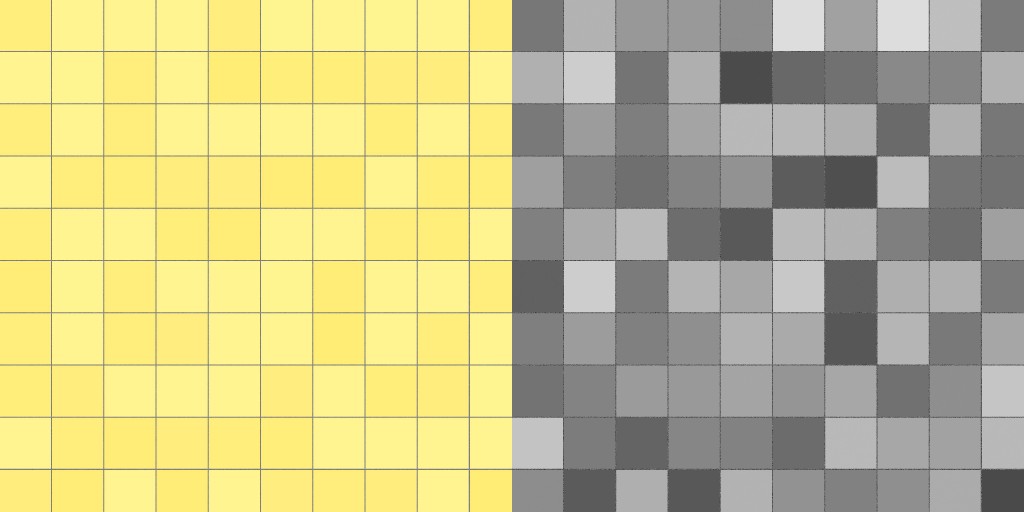 Where the noiseX and noiseY are the x and y coordinates in the noise space, the third parameter is zero (we are only using 2D noise), whereas the octaves and persistence are defined in the reference (Adrian’s Soapbox, 2014). The table below gives a quick summary of how these parameters can affect the visual appearance of the noise function. However, this is just a brief summary. If interested in more detail, please see this reference (Adrian’s Soapbox, 2014).

Lastly, the grout color is prescribed in a similar manner

This time, the grout is of a greyish color, with a color variation from a darker to a lighter tone.

Finally, the description of the tile generator input is concluded with a few more parameters:

The randomTileOrientation parameter specifies if we want the orientation of each tile (e.g. the direction of sampling the noise space) from tile to tile to be consistent, or random. Similarly, the randomTileNoiseStartPoint parameter specifies if the starting point within the specified sampling region is consecutive as the tiles are generated or random. These last two boolean parameters help to achieve a more natural appearance, since tiles can be laid in forming a pattern or at random.

The closing boolean parameter blurFinalImage serves to add a little bit of blur to the final texture image, if needed, to bring together sharp contrasting regions.

Local color variation within each tile

Next we can add local color variation to the tile, so the color not only varies from tile to tile, but also varies within each tile, based on a local noise function, we can get the following 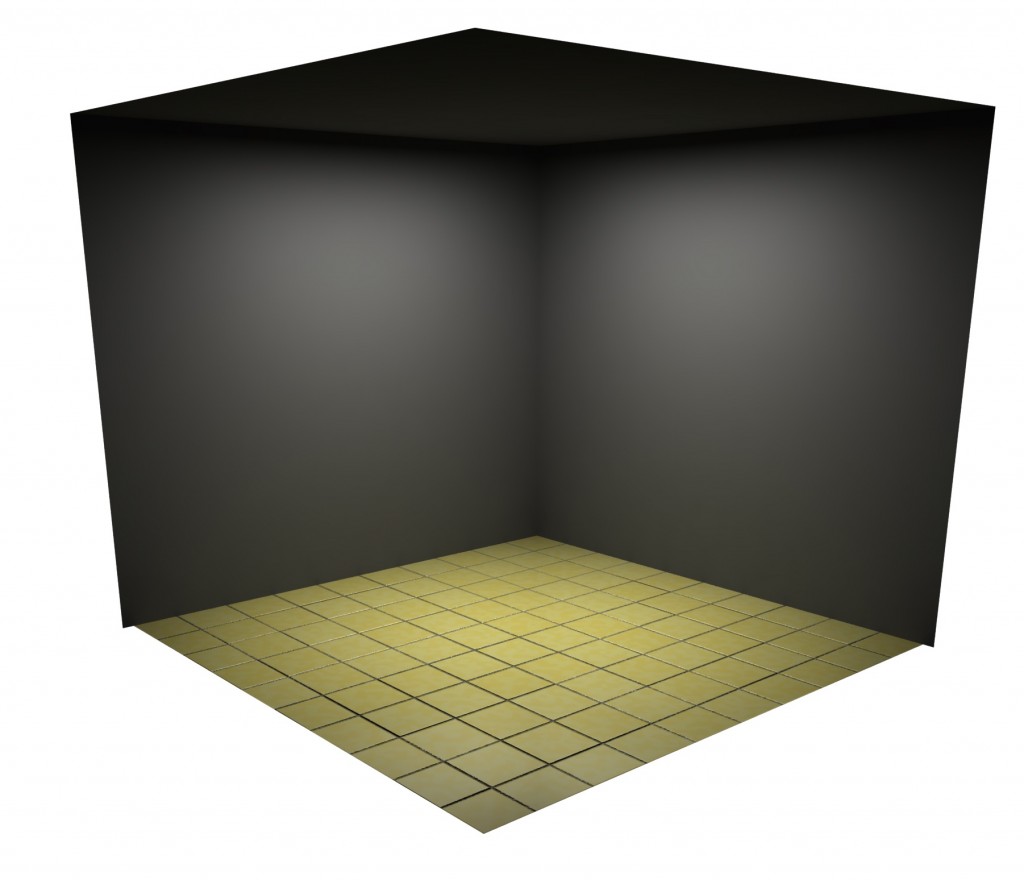 In comparison to Figure 3, the changes are subtle, but they are there, adding that little extra nuance to the visual appearance of the tiles. The texture and bump maps used were as follows 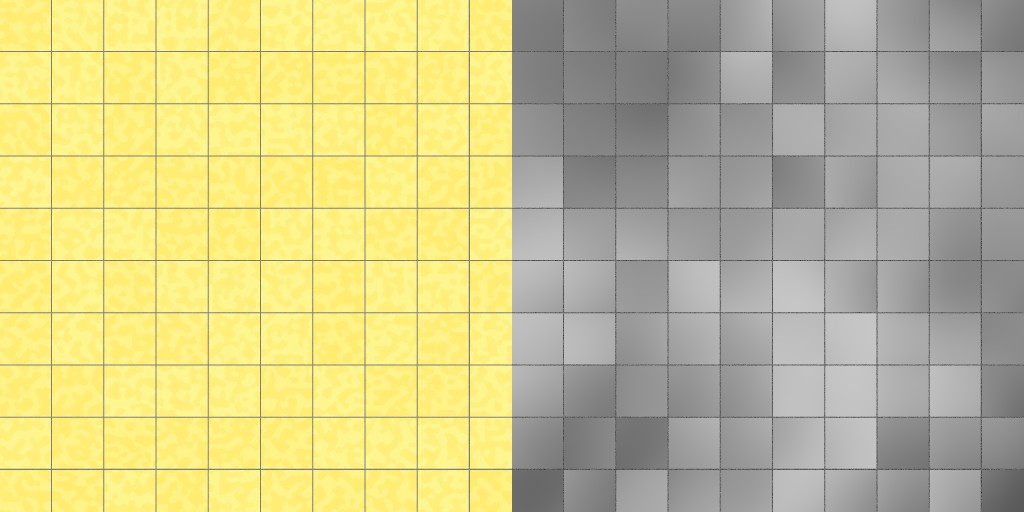 Also note that a small twist was added to the bump maps; a slowly varying noise was used to add some unevenness within the tiles altering their height not only per tile, but within a tile as well. The per-tile color variation was achieved using a local color descriptor, tileColorLocalColor. This color descriptor has exactly the same set of specifiable parameters as its global cousin. The full input file used to generate Figure 7 is as follows

If the number of octaves is increased, a more fine detailed noise variation is achieved within each tile, as Figure 8 illustrates. 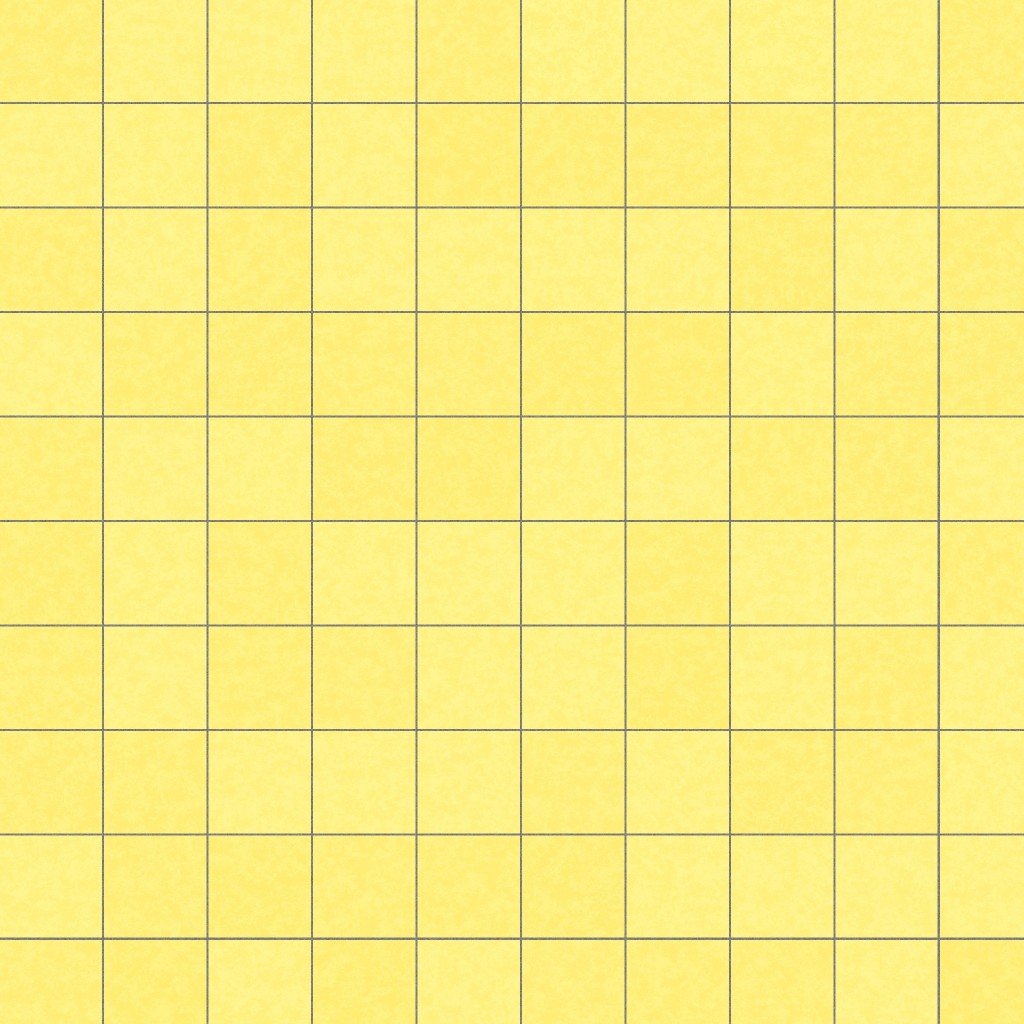 Figure 8 The number of octaves increased to 8, resulting in a finer noise

This concludes the first part of this article. In Part II, further variations on the usage of noise in tile texture making will be discussed.